Modeling Scenarios: What They Are and Why You Should Use Them

Way back in the good old days of getting your punch card stack ready for processing (yes, I have used computer punch cards) only one model run at a time was the norm. You started it and waited for it to finish; hopefully successfully. Technology has progressed since then, but the norm is still to execute one model run at time.

With multi-processor computers and multi-threaded processors, the capability of executing multiple model runs simultaneously has existed since the early 2000’s, but there has been little discussion or chatter on how to take full advantage of these technological capabilities besides having to outsource execution of the model runs. There are ways to full advantage of the computing power readily available, but it does require a change in the way a modeling project is approached.

There Is No Such Thing As A Single Worst Case

In the air quality permitting world, the mentality has been to consider the theoretical worst case operation. If the applicant could demonstrate compliance with that single worst case, then there would never be a problem with complying with the conditions of the issued permit. With air quality standards becoming more restrictive, the single worst case approach sometimes does not even come close to demonstrating compliance. Implementing operating constraints based on the single worst case isn’t helpful either, as the constraints are too restrictive for the applicant to operate.

It is time to toss out this worst case mentality and get more realistic. Using the concept of modeling scenarios can help your modeling project be more realistic by looking at how process operations can actually occur so an applicant can demonstrate compliance with all the rules and regulations and operate a business.

What The Heck Is A Modeling Scenario?

No piece of equipment or process operates the same way all of the time, 24 hours a day, 7 day a week, 365 days a year. There is ALWAYS variability. A modeling scenario allows for this variability to be reasonably captured.

When using operational scenarios, the process operation that is being represented either exists or has already been decided upon how it will exist. As a result, the hard physical source parameters, like:

are allowed to vary based on how the process being permitted can operate.

Another way to use operational scenarios is when not all pieces of equipment operate at the same time.

Typically, all five tanks would be represented as all being filled simultaneously. This is operationally impossible and if this representation doesn’t pass, then what?

This type of use of scenarios still captures worst case operations, but the operational limit, such as one tank being loaded at a time, is not an unrealistic and burdensome restriction.

I am a planner, or at least I try to be. Dispersion modeling is a great planning tool. The earlier it is used the better.

Unlike the operational scenarios, with design scenarios, ALL parameters, even the location, can be varied. Without argument, it is easier to move a stack or change its height and diameter in a modeling input file than to make those changes once it is built in place.

Why Use Modeling Scenarios?

Using modeling scenarios, either operational or design, provides one huge advantage: flexibility. From my experience, many permits have been issued with regulatory constraints that are unrealistically restrictive because they are unrelated to the true operational constraints of process units. With multiple operating scenarios being represented, it is easier and faster for those representations to be documented into permit conditions.

Another advantage to using scenarios is it can save time in two difference ways; during the regulatory review and in executing the modeling runs.

By using operational scenarios, it will make the regulatory review of the air quality analysis (AQA) go smoother and quicker by avoiding iteration after iteration if the predicted concentrations are unacceptably high. Also, the modeling representation should make the description of the process easier for a regulator to fully understand.

One potential disadvantage to using modeling scenarios is more modeling runs will need to be executed. However, if you take advantage of the multiple cores and/or processors in your computer, you can execute multiple model runs simultaneously. If you are running Windows OS on your computer, press Ctrl-Shift-Esc keys at the same time then click the performance tab. Where it says Logical processors, that is how many processes you can have going at the same time without taking any performance hits.

With four logical processors, three model runs can be executed simultaneously without any sacrifice in run time. Always reserve one processor for the OS or things will get bogged down. Keep in mind that separate model runs cannot share input data, e.g. meteorological input file, so you will need to have dedicated input for each run. 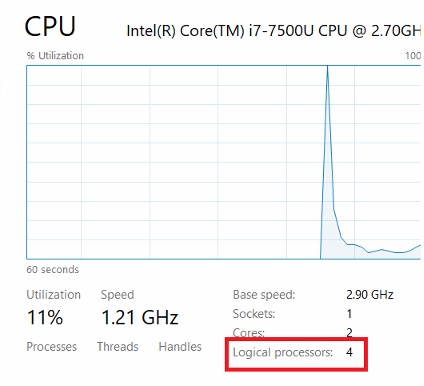 Is There An Alternative To Scenarios?

An alternative to modeling scenarios would be to make use of source groups (SRCGROUP keyword in AERMOD). The downside to source groups is they are incorporated into one model input file, i.e. one modeling run. There is no way to make a single run execute faster on one computer. In addition, model run time is determined by the number of sources, receptors, and source groups. More source groups means longer run times.

As a regulator that had to review AQAs, I did not like the use of source groups that much. Using source groups made it more difficult to unwrap the reason for the different groups and which sources were members of the groups. Having everything in a separate model run, such as the case with scenarios, was just cleaner and easier to review.

Modeling scenarios can provide an air quality permit applicant with more flexibility by including representations of realistic operating scenarios. Also, modeling scenarios can prevent hiccups in the review process if used during the design phase of a project rather than waiting to the end review process to perform dispersion modeling. Though more model runs will need to be executed when using scenarios, by taking full advantage of your computer’s processor, more model runs do not always mean more run time.

If you found this article informative, there is more helpful and actionable information for you.  Go to http://learn.naviknow.com to see a list of past webinar mini-courses. Every Wednesday (Webinar Wednesday), NaviKnow is offering FREE webinar mini-courses on topics related to air quality dispersion modeling and air quality permitting. If you want to be on our email list, drop me a line at [email protected].

One of the goals of NaviKnow is to create an air quality professional community to share ideas and helpful hints like those covered in this article. So if you found this article helpful, please share with a colleague.