How to Find Data for AERMET: Upper Air and Land Use Data

When I was in elementary school in the 1960’s and 70’s, if you needed to look something up, like relevant dates, historical figures and events, etc., you would go to the library. Being too young to drive to the library, I often relied upon the encyclopedias my parents had bought many years earlier; 1955 to be exact.

Most of the time, I could find the information I needed. However, there were still 48 states in the union, Eisenhower was president, and there was minimal information on JFK or LBJ and vice-president Nixon. All of the information was correct for the time, but eventually, it became historical and not representative of the current state of the world.

At that time, the information was barely 15 years old. Imagine applying for an air quality permit today and using vital information for your dispersion modeling that is more than 25 years old.

The Truth and Consequences of AERSURFACE

In the preface to the AERSURFACE User’s Guide, AERSURFACE was “designed to aid in obtaining realistic and reproducible surface characteristic values for AERMET, the meteorological processor for AERMOD.” The program has the capability to use digital land use data to derive surface roughness length {zo}, albedo {r}, and Bowen ratio {Bo} values necessary for developing meteorological input files for use with AERMOD. The program specifically uses data produced by the USGS.

The AERMOD Implementation Guide (December 2016), states, “The availability of high resolution digitized land cover databases provides an opportunity to apply systematic procedures to determine surface characteristics based on an objective analysis of the gridded land cover data across a domain.”

AERSURFACE is great tool that fulfills all the ideals of providing a realistic, reproducible, systematic, and objective analysis of surface characteristics. However, the program is hard coded to use land use data from 1992; more than 25 years old. In some cases, it may not make much difference between using data for 1992 or the latest data available from 2011. In other areas that were purely rural 1992, an urbanization explosion has occurred over time  as depicted in the example shown below.

The first figure shows the land use of an area in Collin County, Texas, in the Dallas area, as it was in 1992. The area was a predominately rural farmland. Based on the 1990 census, the overall population of the area show was about 7,000. 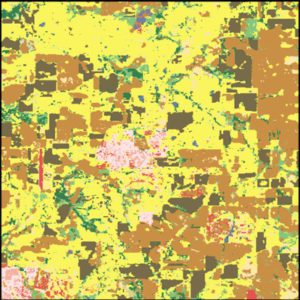 During the 1990’s and early 2000’s, the area was engulfed in the rapid growth and expansion of the Dallas urban area. Based on the 2010 census, the overall population of the same area from before is nearly 150,000. The area now has a modern sports complex with separate facilities for football and baseball, hotels and conference centers, and major retail centers. 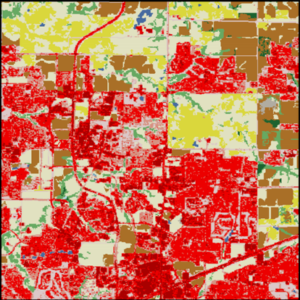 Did the urbanization of the area make a difference in the surface characteristic values? Using AERSURFACE as it is, using data from 1992, the calculated roughness length came out to be 0.133 meters. Performing the roughness length calculation with equations identical to those in the AERSURFACE program but using land use data from 2006 (documented in

https://www.tceq.texas.gov/assets/public/implementation/air/sip/lead/Appendix%20E%20Surface%20Analysis%20Calculations.pdf), the value came to be 0.263 meters, nearly twice the value using 1992 data, for the very same area.

The AERSURFACE program is an useful tool when generating a meteorological input dataset for use with AERMOD, but do be aware the default data it uses may be out of date and not representative. We recommend you first use the NaviKnow Land Use tool (http://landuse.naviknow.com/) to get an idea of how your modeling domain is classified using 2011 data. If you do decide to use the new national land cover datasets (2001, 2006, or 2001), there is more information on mapping Land Use / Land Cover codes here.

If you found this article informative, there is more helpful and actionable information for you.  Go to http://learn.naviknow.com to see a list or past webinar mini-courses. Every Wednesday (Webinar Wednesday), NaviKnow is offering FREE webinar mini-courses on topics related to air quality dispersion modeling and air quality permitting. If you want to be on our email list, drop me a line at [email protected].

One of the goals of NaviKnow is to create an air quality professional community to share ideas and helpful hints like those covered in this article. So if you found this article helpful, please share with a colleague.